Yesterday, I received an email from someone called Mayank Sinha, showing us the Raspberry Pi home security project he’s been working on. He got in touch particularly because, he writes, the Raspberry Pi community has given him “immense support” with his build, and he wanted to dedicate it to the commmunity as thanks.

Mayank’s project is named Asfaleia, a Greek word that means safety, certainty, or security against threats. It’s part of an honourable tradition dating all the way back to 2012: it’s a prototype housed in a polystyrene box, using breadboards and jumper leads and sticky tape. And it’s working! Take a look.

An IOT based home security system. The link to the code: https://ift.tt/2rFq9rY

Asfaleia has a PIR (passive infrared) motion sensor, an IR break beam sensor, and a gas sensor. All are connected to a Raspberry Pi 3 Model B, the latter two via a NodeMCU board. Mayank currently has them set up in a box that’s divided into compartments to model different rooms in a house. 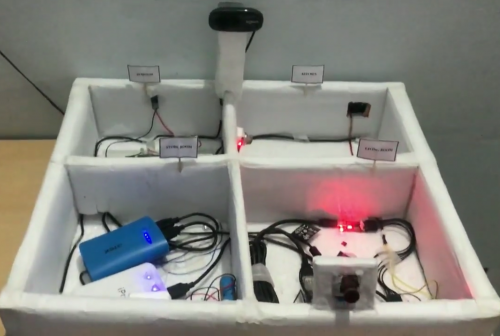 All the best prototypes have sticky tape or rubber bands

If the IR sensors detect motion or a broken beam, the webcam takes a photo and emails it to the build’s owner, and the build also calls their phone (I like your ringtone, Mayank). If the gas sensor detects a leak, the system activates an exhaust fan via a small relay board, and again the owner receives a phone call. The build can also authenticate users via face and fingerprint recognition. The software that runs it all is written in Python, and you can see Mayank’s code on GitHub.

Reading Mayank’s email made me very happy yesterday. We know that thousands of people in our community give a great deal of time and effort to help others learn and make things, and it is always wonderful to see an example of how that support is helping someone turn their ideas into reality. It’s great, too, to see people sharing works-in-progress, as well as polished projects! After all, the average build is more likely to feature rubber bands and Tupperware boxes than meticulously designed laser-cut parts or expert joinery. Mayank’s YouTube channel shows earlier work on this and another Pi project, and I hope he’ll continue to document his builds.

from Raspberry Pi https://ift.tt/2jQhe3n
via IFTTT